My sister is a poet. She's been a poet since the age of six. Or eight. Almost her whole life. And now, she has published a book of her poetry. The poems, she says, reveal the emotional journey of her life. The poems she has written over the course of a lifetime. I don't think the poem she wrote when she was six, or eight, are in the book, but poems she wrote in high school and college are included. The book is titled "Dream of the Antique Dealer's Daughter" after the second poem in the book. One of my favorites.

Robin always loved to read. If memory serves me, she was reading Anne of Green Gables in the 2nd grade. We called her the bookworm. She huddled on the couch with a book, even in the middle of summer. When some plaster fell from the living room ceiling, Robin didn't move from her spot on the couch. My mother found her reading, oblivious to what was happening. I was her opposite. Climbing trees, playing pick-up baseball games, making forts in the woods, for I was the tomboy, not a reader. But I was in awe of her. I remember finding her scribbles on pieces of paper around the house. I knew they were hers and sometimes wondered if she left them on purpose, so anyone could find them and read what she was going through at any given moment.

Robin's poems are haunting and lovely, full of emotional images that deserve to be read over and over. I am still in awe of my sister. How she writes with such passion and voice and raw intensity. How she puts personal snippets of her life in these small boxes called poetry. They are beautiful.

My brother's wife, Liz Smith, designed the cover of the book. After reading the poems several times, she wrote down words that evoked themes. Liz then used these words/themes to create personal pieces of the collage that became the cover art. There is a map of Moldova, a mannequin, books, shells and sand, even a painting of my father's. It's the minutia of the poet's dream. It's an amazing work of art, and a labor of love. 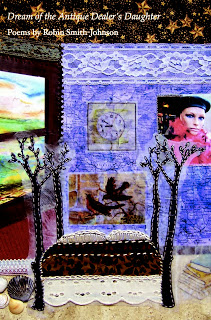 An excerpt from the poem on which the book is titled:

She floats above me:
the mannequin in my parent's shop.
I named her Cordelia
after a storybook character.
The color of coral, her face held
the secret of my growing self.

Robin Smith-Johnson, my sister, has published a book of poetry. My dad, the antique dealer, is surely smiling down from his place in paradise, so proud of his daughter for pursuing her dream.

"Dream of the Antique Dealer's Daughter" by Robin Smith-Johnson, published by Word Poetry, is available at Amazon and Barnes & Noble.

Posted by Laurie Smith Murphy at 11:10 AM